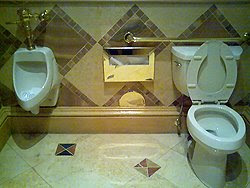 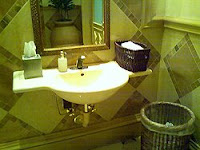 Once there, follow the signs to the entrance of the restaurant, and upon arriving, go through the wooden front doors and enter the dimly lit dining room. The far front end of the restaurant overlooks the Bellagio fountains. The bathrooms are located on the opposite end of the dining room, along the back wall, about two-thirds of the way back.

There, you'll find a small hallway leading to the restrooms. 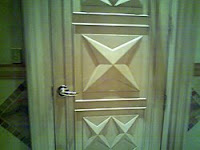 The Bellagio itself comes packed with fine-dining restaurants, from Circo to Michael Mina, to name but a few. This establishment, headed by world-renown chef Julian Serrano, has been my favorite so far. (I've yet to visit the hotel's take on Le Cirque, it should be said.)

While the shopping plaza above the restaurant has an art nouveau feel to it, with its bevy of high-end stores, the restaurant itself feels miles away from that. A mix of old world and new, you step into this place via a castle-like hallway that's dimly lit and a bit cavernous, like a wine cellar. The main dining room, while also dimly lit, is open and wide, with high ceilings and wooden walls covered in decorative diamond patterns and artwork. 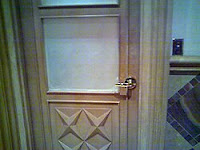 The artwork here, it should be said, is by Picasso himself -- a dozen or so original paintings by the master hang here, and the tables in the dining room, while all properly spaced, allow each person at the table the chance to spend some time gazing at one or more of these pieces, which in itself brings an automatic sense of contemplation to the dining experience.

That sense is further quantified by the magical food Mr. Serrano prepares here. The food here has traditional art nouveau French as its base, but its nuances and modern spirit raise it above the expected. Portions are small but rich and complex enough to satisfy the hungriest of palates -- more than worthy of its two Michelin stars. 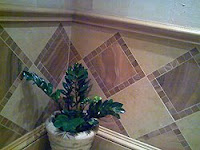 We started with a lobster salad in apple-champagne vinaigrette -- a light, delicate starter course that was accentuated, most surprisingly, but the inclusion of two pieces of celery sitting alongside the main dish. Once blended, the celery brought new dimension to the salad.

Up next was a pan seared scallop atop the most buttery mashed potatoes I've ever had; it was topped with a rich jus de veau. It was followed by a steak of foi gras -- itself only a small piece, but it was expertly seared and melt-in-your-mouth succulent, paired with poached pairs and a creme fraiche gastriche. 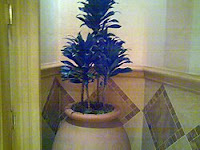 For the fourth course, I had sauteed turbot matched with corona beans and Serrano ham; the fish was buttery, rich, flaky, the beans meaty and tender. My companion one-upped me by having a fillet of imported Kobe beef -- the real stuff from Japan, not the American-born imitator, wagyu. While I've been told many times by waiters that extra-high-quality steaks don't need a knife to be cut, I've never actually seen a steak before that literally melt like butter beneath a hot knife before -- that's how tender this guy was. Better still, unlike some fillet which can be tender but bland, this one was richer and meatier-tasting than any other steak I've had. It was a dish that rivaled the truffle-covered ravioli had at Bartolotta Ristorante di Mare, it was that good. Just spellbinding. 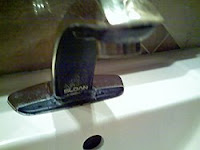 The meal closed with a selection of stately desserts, my favorite of which was a chai tea foam, which accentuated a chocolate cake. It was unbearably pricey, but the service was impeccable and the experience utterly memorable -- so good I don't mind spending the money again to experience it once more. One of the great dining experiences of my life.

Having said that, the bathrooms were fully in line with the dining experience surrounding it. Though there are no Picasso paintings in the bathroom, or even replicas (a bit disappointing), the environment alone carries the same classiness and austerity found in the dining room. 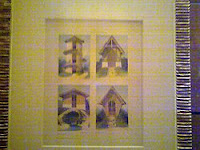 These are elegant one-baggers, but with entrance chambers. So you enter into a wash room and then proceed through another door to enter the water closet properly. (Similar to the set up at Montparnasse 1900, only on a smaller scale.)

Throughout the place, the walls are covered with the same diamond-decorated woodwork that covers the walls of the dining room. The lighting is brighter here though, allowing you the chance to admire the design better. The floor is covered in beige tile with brown accent tiles -- all patterned to mimic the patterns on the walls. The main door is heavy, wooden and covered in a similar diamond patterns; the door dividing the wash chamber with the toilet chamber is similar to the entrance door, only it has a frosted glass pane in it to differentiate one from the other (not exactly the place you want to make such a mistake, if you catch my drift). 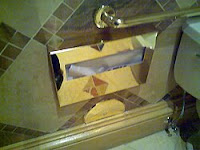 Potted fake plants sit in most of the corners, and some generic, stately art hangs on the walls (panel pieces, really -- simple but nothing remarkable). It's an understated environment in every way, really. Because of the beige and browns everywhere, the lighting manages to throw a sort of golden hue over everything, further subduing in the environment.

The sink is white porcelain with gold-plated fixtures, including an automatic faucet and a dark wood-framed mirror overhead. The sink itself is unique in that it has elongated flaps on the side that work both as part of the sink and as a unified counter piece; on it sit a soap dispenser, paper towels and a box of tissues. 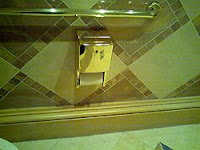 The toilet room itself is very roomy for a single-occupancy room. The urinal and toilet, both white porcelain, sit against the same back wall. The handicap support bars, toilet paper dispenser, and toilet seat cover dispenser box are gold plated, adding to the hue. Like the rest of the place, it's impeccably clean, odor-free and stately. Elegant without being showy -- a thinking person's bathroom, if you will.

There's a lot going on here -- and the place does it without much flash and dash. Not the more spellbinding place upon first glace, but spend a few minutes here, contemplating if you will, and it's wonders begin to reveal themselves.
at 13:11