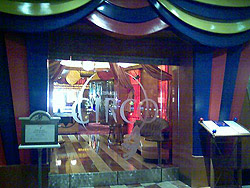 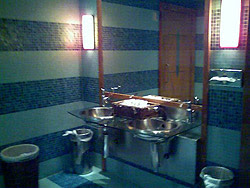 The restaurant itself is located in the Bellagio casino. Once you reach the entrance to the Buffet, turn right (away from the Buffet) and head to the opposite end of the Casino. Circo will be one of the restaurants found in that part of the hotel.

Once inside, the bathroom is easy to find. From the front door, head forward, past the bar, and turn right into an enclave there. The bathrooms are in there.

This fantastic restaurant served me one of the best meals I've ever had -- and as a result I find myself incapable of talking about the place without discussing the meal as well.

The eatery itself is decked out in a circus theme, with tent folds hanging from the ceiling, walls, carpet and booths colored in sharp yellows and blues and paintings of clowns hanging in corners and above tables. By this description, it sounds a bit tacky, sure, but that's hardly the case -- the decor manages to convey the circus theme while also being elegant and subdued enough so that it's not pressing or intrusive. The focus here is on exquisite service and remarkable food, and that surely took center stage on my visit. 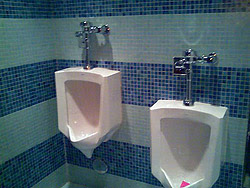 The menu itself is outstanding -- sort of a mix of hearty, well-prepared authentic Italian dishes (freshly baked breads, outstanding pastas and sauces, succulent roasted meat and fish) and seasonal ingredients. I had a five-course tasting menu here, with wine accompaniment (and yes, it was blazingly expensive, but then what isn't in Vegas?). I couldn't have imagined a better meal from a restaurant.

I started with an oyster appetizer, a mixture of seasonal northwest-grown specialties that were the freshest and tastiest I've ever had. They were followed by a grilled squid salad in which the charred flavor of the meat proved strong enough to season the greens on which the squid sat. That was followed by hand-rolled spaghetti (thick stands that were very dumpling-like, instead of thin strands) topped with complex bolognese and bechamel -- a pasta dish so overwhelmingly delicious and nuanced that the couple sitting next to me, who was arguing at the time, stopped talking completely after they took a bite of it (theirs, not ours, that is). Yes, it was THAT good.

That course was followed with potato-crusted salmon, which managed to highlight both the meatiness of the salmon and the delicate manner in which the potato was fried around it. That was followed by the house specialty, a roasted rack of lamb crusted with thyme and pecorino. The seasoning was pressed into the fat cap of the meat in such a way that the fat and crust became one and managed to infuse each bite of meat with the three flavors. It was the best lamb I've ever had.

Dessert featured an outstanding chocolate lava cake served over a marion berry compote and a vanilla-infused creme brulee that I couldn't stop eating, even though I was already full enough to burst at that point. Both desserts were served with an assortment of home made biscotti, chocolates and candies..... Utterly divine.

Each course was served by a friendly wait staff that explained both the composition and inspiration behind the dishes, and the sommelier came by before each course to ruminate about his accompanying wines. Service was laid back but attentive, and as a result I felt very much relaxed and at home here, despite the ever-present price tag. It was one of the best meal experiences of my life. 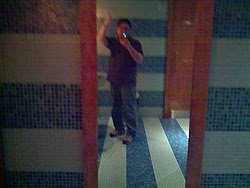 Naturally, after experiencing such a glorious meal, visiting the bathroom becomes a necessity. Circo's facilities do not disappoint, though they are not quite as perfect as they should be. The loos do not extend the circus theme, thankfully, but they are just as understated and ornate as the rest of the place's decor. The walls and floors here are covered in alternating lines of light and dark blue mosaic tile. Because of the uniformity of the tile work, the fixtures become all the more striking against them. The sink and vanity, consisting of metallic sinks, a clear glass counter and a giant mirror framed with dark wood, make a stark, elegant and inviting presence. The white porcelain urinals stand out on the walls almost like pieces of art. The toilets, each in solitary rooms instead of mere stalls, provide elegant, private surroundings in which to do your business. The sinks dish out a lovely hand soap and visitors can dry their hands here with plush cloth towels. 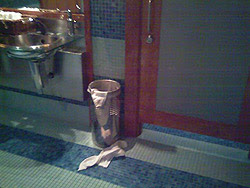 Given that, this is also a small restroom and because the restaurant is somewhat bustling it can make for a busy visit, especially for those seeking a longer, quieter visit. Also, the urinals could use some privacy blinds -- they tend to stick out a bit too much on the wall to offer a relaxed pee. Finally, I found some mis-thrown towels on the floor -- giving the impression that the place isn't policed by the cleaning crew as often as it should be.

Still, coupled with the outstanding menu and unique decorative and modern touches, it's still a fabulous place to visit and experience.

A few more passes by the cleaning crew would be nice, at least to pick up the towels on the floor. Also, you may want to consider adding a privacy blind between the urinals. Otherwise, it's a great bathroom.
at 14:37