Bar's Bathrooms Anything But Sporty -- Especially During Slow Lunchtime Rush 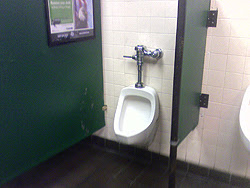 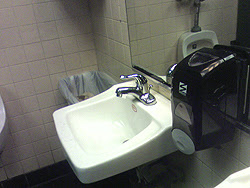 This sports bar chain has several locations in the area. It's a semi-rowdy place that's a big hit with sports fans, especially the college football fans of the area. Inside, the place is styled like a classic New England pub, filled with wooden floors, a well-polished, enormous wooden bar in the center, plenty of wooden tables and high-tops and a vast array of TVs and beer signs on the walls. The food is decent enough, though at times its too greasy (I always feel like I gained 10 pounds when I leave the place), and their wings are some of the better in town (at least from a chain's point of view -- my vote still goes to Tom and Money's, which has been renamed something else of late, I hear, and Hurricane Wings, which will be reviewed in the coming weeks).

Given that this is a place where sports guys and frat boys tend to congregate, you can imagine that the bathrooms are an utter mess. And they are. If you think about it, the patrons usually come here to fill up on beer and junk food, so pit stops are inevitable, especially since most visits are for a minimum of three to four hours (given that's the average length of a football game). As a result, you can expect some wear and tear from the bathrooms.

Design-wise, the loos themselves are nothing special: Small rooms with four toilets in all (two urinals, two commodes) with green linoleum on the floor, a green vanity counter, and white tile on the walls. Little wall decor or any other bit of sports bar personality can be found here (clearly the designers haven't been to the Celebration Town Tavern, where this sort of decor is done well).

In terms of overall cleanliness: On the whole, the city's Ale Houses manage to keep things a little tidy on the bathroom front (like the one on University -- still unreviewed -- or the one by the airport -- also unreviewed). The Sanford one was messy as hell however -- a point made all the more disappointing since my stop was during lunch on a weekday, not during any sort of game. Worse still, it was a very slow lunch rush indeed.

I found spilled water everywhere, paper towels and toilet paper covering the floor, mis-sprayed urine on toilet seats and a funky, immensely strong stink of pee in the air. Certainly not very sporty, to say the least.

Mind you, I might expect the loos here to be in this condition after this year's big Florida-LSU night game, as 250 Gator fans no doubt sought to purge the sorrow they felt when they're team lost it in the final minutes by drinking mass quantities of cheap beer and then hitting the head en mass. But not on a slow lunch on a weekday, with maybe 50 patrons in the place tops.

4. Almost rated a 5 but the fact that the place wasn't busy and still managed to be the dirtiest Ale House restroom I'd visited dropped it down a notch.

I understand that bathrooms can't always be monitored when the place is busy, but that mentality certainly doesn't apply when the place is empty. In down times, get someone in there to tidy up a bit. Also, bring some extra air freshener, like Sebastian's Country Ham N Eggs does.
at 14:39