Bathroom at Zefferino Las Vegas May Just Be the World's Best -- It's That Good! 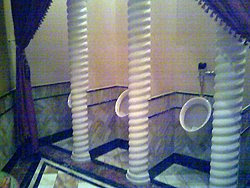 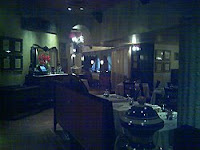 This restaurant is located in the Canal Shoppes inside the Venetian Hotel and Casino, between the Ann Taylor store and Simayof jewelers.

The first floor is more of a two-tiered lounge area, with a ornate bar, piano, some bar tables and a counter with iced down shellfish and the like. Upstairs is the main dining room, which you can get to either by elevator or stairs.

To go to the bathroom, and if you're taking the stairs, got to the top of the stairs. This will deposit you in a small sitting area covered with framed pictures of famous people who have visited the establishment (either here or at one of its other locations around the world) since 1939, when it first opened in Genova. If taking the elevator: It will drop you off to the left of that sitting area. 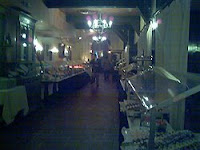 In both cases, the main dining room will unfold to your right, so to get to the bathrooms you will need to head leftward -- away from the dining room. (The restaurant's website actually incorporates the establishment's floor plan into its navigation -- a good tool to use before visiting, if you're curious.)

Once going that way, snake back, down a twisting hallway coated with various framed articles about the restaurants and some joyous Medieval mosaics, until you reach the end, at which you'll find the bathroom. The men's is behind a rather dainty door, simply and manly looking. The women's is behind a very ornate door. 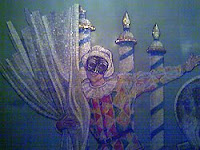 This famed Italian restaurant, as stated earlier, started in Genova, Italy in 1939 and one of its original chefs, Gian Paolo Belloni (who's father was Zefferino himself), is credited for making pesto a world-wide phenomenon. The restaurant itself celebrates the reputation of the kitchen, as many of the wall hangings here are framed newspaper and magazine articles from around the world which tout the chef's skill, including more than a few saying that the Gian Paolo has made his famous pesto and pasta for the Pope himself. 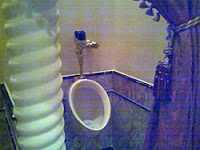 The design of the place brings to mind the spirit of a twisted Venetian walkway -- something the Grand Canal Shoppes intimate but don't actualize. The entrance, as stated earlier, is large, grand and old-feeling, with lots of small corridors, twists and turns, and angled rooms, overlooks, dark woods and chandeliers. Upstairs, the dining room literally unfolds before you, starting small and then twisting open around a large rectangular pivot to reveal an extensive stretch of white linen tables that follows the perimeter of the facade (which overlooks the Canal Shoppes) and recedes deep into the belly of the restaurant.

Dark woods and dim lighting dominate the place. The walls are covered with those framed articles and other pieces of Italian or Italian-inspired art -- think de Medici re-visited and you've got it. 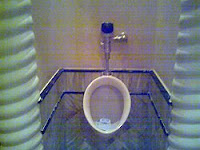 The service is uppity and very accommodating but not necessarily warm -- it's very professional, as what you might get overseas. Although I have not eaten here outside of its famed Sunday champagne brunch, I will attest that this brunch is one of the best, if not the best, I've experienced.

It features a sprawling set of tables, each offering a different variety of food. There is both a hot and cold seafood area, including selections like marinated tuna and in-house smoked salmon, as well as a hot bar containing an assortment of chicken, meat and seafood dishes -- not to mention the house's special pesto and pasta, which is indeed divine. There is also a selection of world cheeses, a raw bar containing halved lobsters, shrimp and other shellfish, a carving station, a pasta station and an antipasto area, containing an assortment of fresh and marinated vegetables and cold cuts. Finally, there is a an extensive dessert table, containing a minimum of 20 cakes and petite fours -- all of which are worth trying. It's a very impressive buffet in a land of buffets, if you will. Definitely worth a visit, despite the steep price tag. 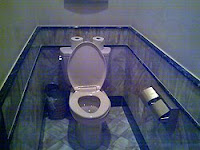 On the flip side, the bathrooms here are beyond the notion of impressive. Even beyond the impression of being heavenly. I've been here twice, the first two a few years back, and on that visit the bathroom I encountered a tasteful one-bagger that was comfortable but unspectacular.

In between that visit and this, it was rumored that the restaurant had spent more than $2 million on renovating its bathroom. I must attest that you can see the money spent in every facet of this room. It's a truly regal place in every regard -- something more associated with a Roman Emperor than an Italian place in a Vegas casino mall. 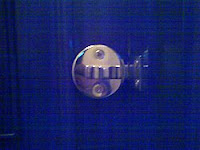 And miles better than any other bathroom found in the Venetian.

In fact, it's so impressive here that I actually believe this bathroom bests any other I've experienced in this town -- or anywhere else, including such wonderful places as Wynn Las Vegas, Bartolotta Ristorante di Mare, Paris Las Vegas Hotel and Casino, Sensi, Okada and the Bellagio. It's even better than our vote for 2008's Best Toilet of the Year -- Mansion at Forsyth Park in Savannah, GA.

This is just an other worldly experience from start to finish.

So what's it like? After passing down the hallway leading to them, and marveling at the intricate mosaic work on the walls, you come to a modest-looking door, which in effect makes you think this will be nothing more than a humble toilet -- like the aforementioned one-bagger. 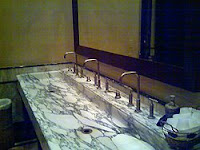 Step through the door and you're floored: This spacious environment boasts marble floors that look like they've been taken from a palace (I'm thinking the floors found in the Hermitage Museum in St. Petersburg, Russia, for example, even though the bathrooms there are awful and not at all indicative of the beauty of the rest of the place.) The marble work has beige and white checkerboard pattern, with dark brown and black outlines and highlights. The lower walls have a beige/white marble pattern on the, with black trim, and the upper walls are made of plaster.

Along the far left of the back wall are three urinal stalls. Each has twisted columns at their head, as well as a sweeping red curtain blanketing them. The stalls themselves are deep, with long floor-to-ceiling divider walls. The urinals are small bell-shaped units with automatic flushes. 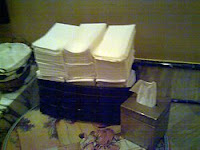 To their left, in the back right corner, are three toilet stalls. Like the urinals, these are deep chambers, with gray and white marble along the lower halves of their walls and wallpapered walls on the upper. They are white porcelain toilets in their very backs, with storage chambers overhead and bronze toilet paper holders to their side. A heavy wooden door with gold plated latch closes the place off from the rest of the room, creating a very private chamber indeed. Lighting is dim but not overly so. Some toilet paper is stacked atop the toilet itself -- something I find decided European in its charms.

Across from the urinals and toilets is a long vanity area, composed of a single stretch mirror framed in dark wood, three bronze-metal spigot faucets with matching manual knobs and accompanying standalone soap dispensers, and a single-piece, three-unit flat, square marble trough, which doubles as both the vanity and the sink. Quite a spectacle to behold. 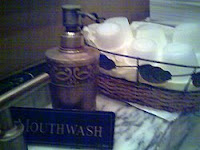 To its right is a toiletries station, which features plush paper towels, tissues and a mouthwash dispenser, along with disposable single-use plastic cups. (This was the first time I've seen such an add-on since visiting Orlando's Citrus Club.)

I spent a lot of time here, I must admit, and after leaving it to return to my table I felt disappointed. As decorative and classy as the dining room was, it paled in comparison to the elegance of this bathroom.

Worse still: When I returned, I was told by my dining companion that the women's room was even more regal, with sitting stations, waiting areas, extensive vanities and more. Next time I'm here, I'm venturing inside to see what I'm missing.

You are worthy of psalms. Could I rent a toilet stall for a week next time I'm in Vegas?
at 13:37