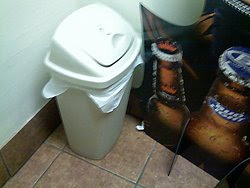 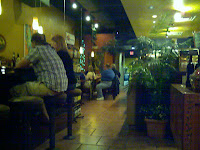 This is another long and thin interior, like the recently reviewed Pannullo's, only unlike that place you have a few more obstacles to cross in order to reach the bathroom.

From the front entrance, head to the back of the place, crossing a wine bar on your left and then a coffee bar on your right (which also has a window cooler for cakes and such), as well as a small assortment of couches and cafe tables taking up the spaces in between.

At the back wall, you'll see a door leading to a small kitchen on the far right and a small hallway leading to the rear of the establishment in the dead center of the back wall. The bathrooms are down that hallway. 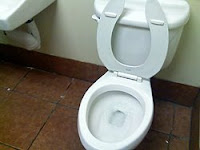 This is a little neighborhood coffee house and wine bar located just north of Altamonte Springs, in the northern regions of the Orlando area. The place itself looks and feels similar to many of its coffee house brethren, in that the decor is homey yet funky and the spaces are meant for lounging and sipping beer, coffee or wine and for whiling away a few hours. Think of Bongo Java in Nashville, only without the crazy comic-book-inspired drawings. Or Huffkins in Witney, England.

Though having said that it's homey-er in here than those places -- while most coffee house chains (Starbucks, Barnie's, etc.) make their dining rooms hip hangouts with lots of polished decor, this one has a more homespun air to the arrangement. It's hip but earthy, if you will. Part of that's from wear and tear, but part's also from it being independently decorated. 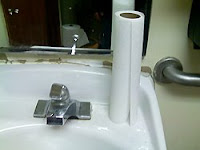 The coffee is decent and the wine and beer selection (bottles only) are better than expected. The food is okay, though one of the two cakes I sampled tasted like it'd been in a cooler well past its due date. I've heard the sandwiches are good, but I didn't try them.

Judging from my visit, I will say the clientele is a tad sketchy and rough around the edges, which I think is perhaps due in part that the location of the store is a bit out of the way for most semi-sophisticated coffee drinkers or wine drinkers to visit. On my stop, a particular regular sitting at the wine bar decided to start up a rather volatile and long-winded drunken tirade aimed at nearly all the other customers there, the acoustic duo playing on a stage setup by the entrance hall to the bathrooms (the duo were friends of mine) and, what seemed, herself. Really, it was a bloody mess -- who thought boozers hung out and drank freely at coffee houses? Not I, until I visited here.

Anyway, when we asked the owner if he would mind stepping in and quieting things, he said that she was a regular who usually garnered a $60 bar tab and as such he felt that he needed to cut her a little slack. I appreciate the sentiment, considering today's economic woes, but at the same time you wonder if his other customers mattered much in comparison. I'm not so sure, to be honest, but I'll leave my speculations at that. 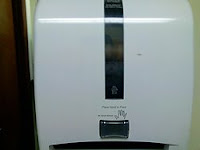 Anyway, the bathrooms don't extend the homespun hipness of the dining room. In fact, they feel more in line with what was found at Sharky's Shrimp Shack and the Long Point Cafe than anything else. One-baggers, single-chamber units, with the bare necessities and little else. Only it's not as polished as those.

It should be noted that the toilets here have many more beer ads than one might expect. In fact, I haven't seen so many beer ads in a bathroom since visiting the Pig and Whistle Pub in Sebastian, FL. Of course, this place isn't that extensive, but it's still more than what I would expect a coffee house to have. Clearly, this place is on some mailing lists! 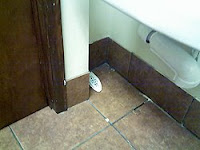 Anyway, the place has just one toilet, one sink station and one urinal -- all white porcelain and all pretty standard in make and model (take the beer ads out and you probably couldn't tell the difference between this place and the toilet at World Market Sand Lake Road, for example). The floors are covered with that standard red-brick tile we've seen at countless other places, like Harris Teeter Raleigh and Fresh Market Orlando, among others. The walls are white drywall -- again, nothing special.

Everything was pretty clean, though the floor was dotted with lots of pieces of paper -- not sure if that was from some deteriorating beer ads or from the toilet paper or paper towels. Most likely the latter, since the towel dispenser was empty and instead of refilling it a nearly empty roll sat atop the sink for all to use (or make confetti from). 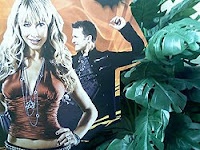 Elsewhere, there was some noticeable wear and tear in the seams behind the sink and the toilet -- and there was an mountable air freshener slipped into the area behind the door.

5. Not terrible, but not great either. You could see the place going up or down in score on any given night, really.

I don't mind the beer ads, but a more creative presentation might be better instead of just piling them on the back wall. And why not make the interior homey, like what's been done at Greens and Grille, or to a lesser degree, the Ravenous Pig? And it couldn't hurt to keep the paper towel dispenser stocked up so there isn't as much confetti on the floor.
at 14:40