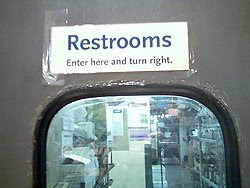 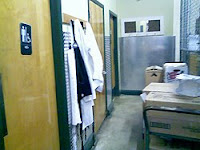 There, you'll see a service door leading to the storage area behind the coolers; on it is a sign reading, "RESTROOMS. Enter here and turn right."

Do that. Go in and you'll find yourself surrounded by shelves housing the various dry goods sold in the store. Slink past a few shelves until you come to a small hallway opening on your right. Down that hallway are the bathrooms, in an area that looks more like it's a place to shower down factor workers after a hard shift than an entrance to a bathroom. 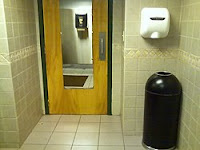 This Whole Foods, the first built in the Orlando area, is a considerably smaller store than its South Orlando brother. That store is large, with wide aisles, plenty of roomy display areas and lots of bright lighting.

This one is about half the size of that one, if not smaller, and feels very crammed the minute you arrive (comparatively speaking, of course) -- including the parking lot, which doesn't seem well-equipped to handle the traffic load the place demands. 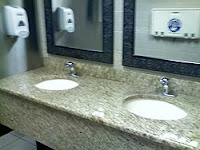 Still, this store offers many of the same items as its South Orlando brother. It's got a modestly sized produce with many fresh offerings (coincidentally, I think this location handles its produce better than the South Orlando store), a string of small counters selling fresh fish, meat and poultry, an assortment of freezers and a slew of aisles containing organic or gourmet dry and canned goods.

Unlike the South Orlando store, the aisles here are much tighter -- and often it's a struggle to get two carts past one another if they meet half way. Also, the lighting in some areas is a bit too dim - especially in the cheese and wine areas, for one. There are also fewer ready-to-eat options -- unlike the South Orlando store, this place doesn't have a grill or BBQ bar, just a small assortment of hot and cold food buffet tables, nothing more. (Though, if my last visit to the South Orlando store is indicative, it seems that location is phasing out those options as well -- apparently the regular clientele there doesn't make use of these facilities enough to keep them around for much longer.) 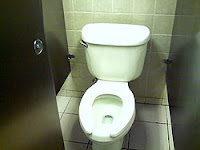 As a whole, this location packs a lot of punch into its tight quarters but at the same time it has a slight industrial air about it as well -- probably because the building it's housed in is much older than the one housing the South Orlando store, which is brand new.

Thus, when you head for the bathrooms and find yourself having to pass through a storage area, you expect the toilets here to be rather industrial in look and feel, like what was seen at Laurenzo's in North Miami Beach. So imagine my surprise when I stepped into this luxurious locale -- which works more like a subdued version of the hip bathrooms at the South Orlando store than anything else.

This is a long and thin cavern, with large off-white tile on the floor and smaller beige tile on the walls. A tile trim line has been set to highlight the walls.

A two-station vanity is set at the front, with a counter made of marble and two individually framed mirrors set above each sink. Faucets are a bit of a letdown -- both in terms of their antiquated design (reminiscent of what was seen at the Delta Crown Room in the JFK International terminal) and their poor water flow (it kind of spits out in all directions instead of straight down -- no doubt, the low-flow blocker has to be cleaned or adjusted). 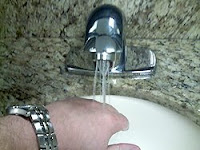 Beyond that are two white porcelain urinals, which are bordered by black metal toilet stall walls and offer wonderful privacy, like the toilets at Jimmy Buffet Margaritaville and the Central Florida Zoo.

In the back are two toilet stalls, a normal-sized one and a handicap one in the very back. Both contain standard white porcelain toilets.

The place itself was sparkling clean and fresh smelling -- another surprise. Though it should be said that I did manage to find a couple of wear-and-tear dings in the design, like a hole in the tile near where a urinal's pipe entered the wall (smaller than what was seen at the Venetian in Las Vegas, though). 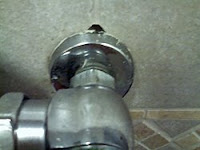 Another amusing note is the sign I found hanging above one of the wall-mounted soap dispensers: "All Team Members Must Remove Aprons & Chef Coats Before Entering Restrooms." Quite a difference from the usual "All Employees Must Wash Hands Before Leaving" you usually see. Of course, the former is a sign I would expect to see -- but didn't -- in Laurenzo's in North Miami Beach. That wasn't the case there, though. Instead, that place had actual drawings showing what an employee must do to wash his or her hands. 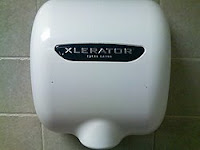 8. Really a 7, but I was expecting something so much worse and then found this oasis, so I had to raise the score a notch.

This is a real hidden gem -- and worthy of commendation. Truly an unexpected find. Just touch up on a few things -- fix the faucet flow, the holes in the tile here and there -- and you may just have one of the best hidden gem bathrooms in Central Florida.
at 14:17