Little Too Much "Yellow" at This Hip Cafe 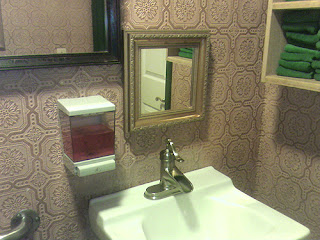 From the maitre d' table: Go into the dining room, towards the stairs leading to the lower level. But before you get to the stairs, take a left (into the restaurant's second dining room) and head towards the kitchen. Once you do, you'll face-to-face come with a bar area set up around a chef's station. Go past that and into the hallway just beyond. The toilets are there.

This is a hip little eatery found on the outskirts of Melbourne. The interior is filled with folk art and pictures of dogs, and the menu wears its modern gourmet American influences like a badge of honor. The food here is imaginatively prepared and tasty, albeit a bit too rich for a casual night out and drenched in various sauces, it seems. The highlights are the salads, which are creative and tantalizing. 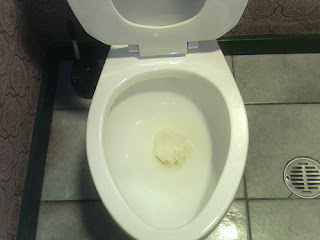 Except that the person who used the toilet before me had not flushed -- and instead of a funky clean bathroom I was greeted by a toilet filled with someone else's pee and toilet paper. This, of course, made me wonder what the "Yellow" in "Yellow Dog Cafe" really referred too..... which in turn led to a night of horrific paranoia. Ick.

7. Would have been higher were it not for the unflushed toilet.

While you may have a hip, sophisticated, fun environment on your hand and a creative menu, your clientele (or staff?) clearly isn't as sophisticated as you might believe they are. Perhaps it's time to start screening people at the door. Before they enter, ask: "Do you flush the toilet after going to the bathroom?" If they say "No" or appear hesitant, refuse them entry!
at 03:06