3 is the Magic Number 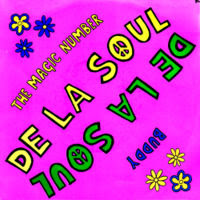 From the entrance head left. Follow through the chairs to the end of the restaurant and then to the right. There is a clearly signposted door through to the toilets. 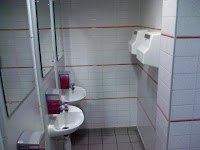 We’d eaten out and didn’t like the dessert menu too much and fell back on the trusty McDonald’s ice cream cone to finish things off. As we were approaching the restaurant I thought how the golden arches on their side would look like a number 3. And then remembered that De La Soul say three, that’s the magic number, yes it is! I’m not sure if it’s a pity that they didn’t use the golden arches on the single cover or not?

The whole theme continued in inside. Three staff, three sets of toilets (male / femal / disabled) and so on. I guess I’d have to say the staff seem to strike the same sort of happy tone from the De La Soul track too. This is one of the cleanest and friendliest McDonald’s that I know. Converted from the Carpenters Arms in 2002, it has worn well with the management obviously caring for the place in a way you rarely see in a fast food chain. 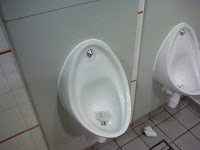 This is something that carries through to the toilets. They are on the basic side but well maintained. I’ve never seen a lock, door or soap dispenser out of order here. On this trip they had obviously been cleaned recently. Well done to the staff on that one. Still, some shit bag had managed to put toilet paper in one of the urinals, luckily not quite blocking it. I assume this is one of the ‘guests’ rather than one of the staff, but it still has to knock down the grading.

Keep happy and slap the customers into line!
at 21:53