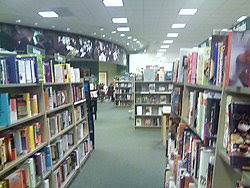 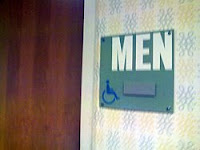 This store has kind of a fat "L" shape to it, with the main entrance to the back apex of the letter's shape. Once inside, you'll see the bargain books and kid's area to the far left, the fiction and music area to the far right and, behind a sea of shelves housing self-help and other thematically tied books, the pre-requisite cafe.

Go to the cafe, which is in the front apex of the "L"-shaped floor plan, and while facing it veer to the right of it. Once there, you'll see a hallway leading behind the cafe some -- the bathrooms are there. 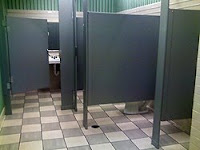 This is a sad affair in terms of a book store. Sure, this location of the popular book store chain has the set-up and familiar design, including wall after all of shelves, a kiddie play area, a music and video area and a cafe, but everything feels somewhat ramshackle inside, as if planners had decided to throw everything and anything that's relevant to a bookstore into the place and hope for the best.

It's a crammed store, from the cashier area that's literally jammed with impulse-buy displays to the aisles of books, which are placed so closely together you feel like you're privacy is being invaded if someone else is in the same row as you. It's not a pleasant environment to be in. It's disorganized and filled with anxiety -- I have trouble relaxing here. 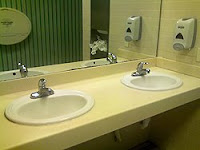 I also have trouble finding the books I want. I came in looking for a copy of Aravind Adiga's novel "The White Tiger," which I assumed would be easy to find because it'd just won the Booker Prize a few weeks earlier and was on U.S. best seller lists. I searched and searched for it but came up empty. Then I asked a clerk, thinking I was just being obtuse and it was in an easy to locate spot, but but the clerk I spoke to had never heard of it and after looking it up in the computer, she said, "Yes, we have a few copies," and then proceeded to take me down the "A" aisle for fiction, which had the book stored under the author's first name instead of his last. So it goes. 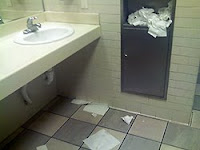 But having said that, the interior here pretty indicative of the neighborhood it's in. Orlando's Waterford Lakes region is a cluster of poorly designed traffic ways, impatient people and similar-looking storefronts, half of which are struggling to stay in business and half of which seem to not care if they stay in business or not (like this store, I'm sorry to say). If it didn't have the best Thai restaurant in Orlando, I would not bother coming to this area at all.

The bathroom here is just as disappointing as the rest of the place -- and the shopping area around it. In most cases, bookstore bathrooms are safe havens: Typically clean, quiet, civil. This place is anything but. While it is quiet, it's a smelly mess filled with water and paper, unflushed toilets and mildew-covered sinks. In many ways, coming here is like walking into a dorm room -- the people who should be cleaning it just don't seem to care enough to go through with the job and as such do their job half-assed. 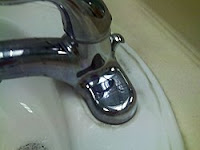 The set-up is pretty standard (almost identical to what was found at Conservation Station in Disney's Animal Kingdom, only this is a tad roomier and it lacks the animal noises heard on the soundtrack to that location): A two-sink station at the front, followed by two urinals (set deep within long stall walls) and then two toilet stalls, the very back one being the handicap stall. A gray and white checkerboard tile pattern covers the floor, white tile covers the walls, except in the back toilet stall where you'll find white drywall.

The vanity is your standard Formica counter top, with bland white sinks and manual faucets and soap dispensers. An automatic air dryer is mounted just off the vanity so you can dry your hands. A ring of noticeable mildew surrounded the sealant lines of the faucets and sinks themselves -- pretty gross. 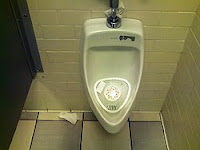 The urinals are nothing special, as are the toilets: Standard white porcelain models, nothing more. Both have manual flushes, and as such I found both the urinals and toilets in unflushed states. The floor was covered in mis-thrown and discarded paper towels, and the sinks were drenched in water.

Worse still is the stench in the place: Easily the worst-smelling place I've stepped in since visiting that horrid CVS Pharmacy on HWY 80 in Savannah, GA. Not quite as bad as that but still pretty awful; it takes a while for you to get used to it, if you do at all, that is. 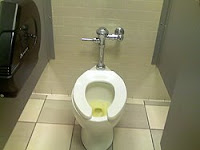 Bathrooms in such locations should at the very least be manageable and reliable -- like what was seen at Rainforest Coffee Cafe, Huffkins in Witney, England, or Starbucks, (or to a greater degree, Bongo Java). Instead, we get something approaching horrific. Shameful, I hate to say it. 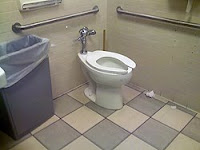 Need to patrol this place pretty regularly to keep it clean, not just at the end of the day. Also, increase ventilation and add some air fresheners. Automatic flushing systems would ensure no one has to walk in on someone else's leftovers. Use a stronger cleanser to remove all the mildew from around the sink. Bottom line: Make the place comfortable for your customers.
at 14:23

Here's a thought.... The bathroom are foul because of the general public who use them. I have found that humans become lower than animals when in public. Most public restrooms are sanitized at least once a day, and yet are gross by mid-afternoon. It is you, the general public, that make this look (and smell) the way it does. The employees don't want to step in your puddles or sit in your dribbles, either. If you can't behave like an adult with a little courtesy, hold it until you get home. Thanks