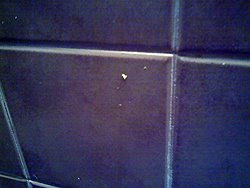 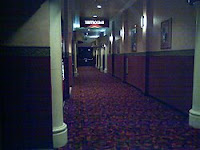 There are several bathrooms located inside this movie theater. This one is located in the far right (eastbound?) wing of the theater itself.

To get there, enter through the lobby and, after handing your ticket to the usher, veer off to the right and down the main hallway there leading to the theaters in that end of the establishment.

As you go, you'll immediately pass the main concession stand on your left, as well as the entrances to one of the the theater's larger stadiums (there's another, similar one on the other end of the concession stand) then a small hallway leading to three or four smaller theaters (which will be on your right). Keep going straight, until you hit the back wall (you'll pass a smaller concession stand on your left as you walk, though this one is often closed), which itself places you dead center in another longer hallway, which has six or so theaters to each side.

Go left and you'll see the restroom sign hanging from the ceiling. Turn left when you reach the sign and go right for the men's room and left for the women's. 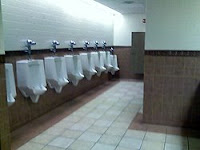 This is a decent, standard multiplex theater slapped at the very end of Orlando's International Drive, the city's primary non-Disney-based tourism strip. The theater itself is one of the cornerstone businesses in the Festival Bay Mall, which has several worthwhile stores and eateries (my favorite in the mall being Fuddruckers) but also houses a number of empty storefronts, which makes shopping there a touch on the unsettling side. (The mall itself is across the street from Texas de Brazil and Orlando's Prime Outlets -- formerly the Belz Outlets -- which covers several blocks of real estate with various stores.) 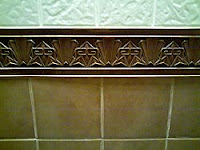 The theater complex itself is dimly lit and filled with golden hues and old-movie-parlor touches, even though you can tell it's a very new building in every respect. Seats are comfortable (though have a shorter back than what I would prefer) and all theaters themselves are setup with stadium seating, so you don't have to contend much with people blocking your view. Picture and sound quality are pretty good, and usually matinees are not very crowded (unless it's the opening weekend of a major release). It's also a good place to while away a few hours if you're in the area and don't feel like shopping but your friends, out-of-town visitors or guests do. 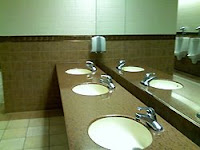 The bathrooms, upon first impression, seem pretty classy -- though that impression is ruined upon closer inspection.

It's a large environment, long and stretching but not too narrow, and well-spaced. About eight or so urinals hang along the left wall (if facing the back wall), and a stretch of four or so toilet stalls stand opposite them in the far corner of the place. Brown metal dividers separate the stalls but the urinals have no privacy barriers between them, which leaves you a bit open to peepers if you're standing at them and someone comes in. 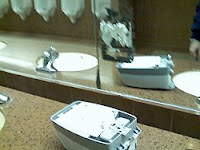 There is a multi-station vanity, with a bland brick-colored granite counter and some white porcelain embedded sinks, in the front right of the room. Three automatic hand dryers hang on the wall opposite the vanity. The vanity itself is nothing special, the same sort of setup as I've seen (most recently) at places like Animal Kingdom (at the bathrooms near the Flame Tree Restaurant, for example) and (on a smaller scale) Whole Foods Winter Park. This one has manual faucets and soap pumps though. 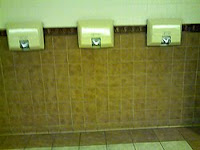 Spend a little time at the vanity and that classy first impression starts to waver. While I didn't find it waterlogged (perhaps because I attended the first screening of the day on my visit and seemed to be one of the first to enter the facility), I did find that one of the soap dispensers had become unglued from the stretch mirror behind the vanity and was laying dead on the counter, alongside bits of plastic that had broken off in the fall. Certainly this needs to be fixed. 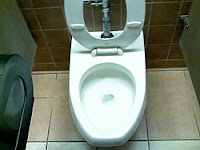 The toilet stalls were clean, but the walls of the stall I entered were speckled with bits of goo, which I can only assume are boogers flicked on the wall from a previous visitor. Pretty gross.

If that weren't enough, the latches to the stall door I found myself behind was pretty greasy on the edges, as if years of finger grease has accumulated on it from people sliding it back and forth so many times.

These little things, I'm sorry to say, made the experience less than savory and made me hurry with my business, for fear of what other items the cleaning crew had overlooked might appear here. 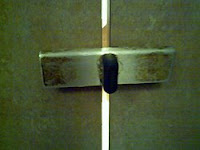 6. Would be an 8 if it were not for the greasy latch, felled soup dispenser and boogers on the wall.

The soap dispenser is an easy fix -- just mount it right and move on. But the greasy latch and boogers make me think that your cleaning crew just focuses on the main target items (toilets, vanity, floor) and not the rest of the place. Time to do a head-to-toe scrubbing of the place.
at 14:32