IDC Bathroom Does a Lot With Very Little 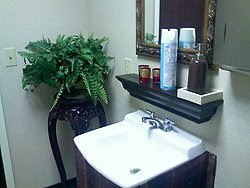 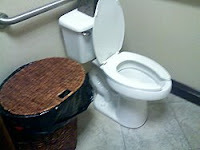 Easy to find but not so easy to get to.

First, to get into the building, you have to pass through a double-gated security door that's covered with magnetic locks and security cameras. It's a bit tricky to get through because once you pass through the outer door, you have to wait until you're cleared by the place's security to come inside. Only then will the lock for the interior door be released and you will be allowed to enter.

After that, you will see a bevy of jewelry display counters lining the place, as well as a hallway directly opposite the entrance, along the back wall. Go down that hallway but don't go to the end -- which leads to storage rooms and offices. Instead, in the hallway, look to your right and you'll see the bathrooms there. 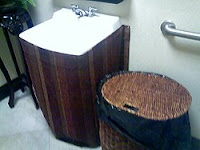 This jewelry store set across from the popular Florida Mall, in Orlando's tourism sector, is a lot larger on the inside than its modest exterior suggests. The sales floor is pretty wide and sprawling and the interior is dark and classy but not overdone and pretentious. For jewelry stores, this one felt pretty down to earth to me.

The bathroom is the real gems here, though. It's a one-bagger for both sexes, with a simple set-up that's not very different from other simple one-baggers we've seen over the years (the bathrooms at Long Point Cafe and Sharky's Shrimp Shack come to mind as what these most resemble facilities-wise and space-wise). The walls are white drywall, the floor is covered in a grey-white marble tile reminiscent of what was seen at Cavallari Gourmet or Strollo's. A little less ornate than those, yes, but still in the same ball park -- and just as classy without having to try as hard. 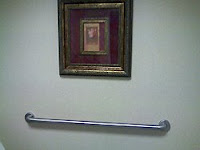 The toilet and sink are your standard white porcelain models -- not different at all from what was seen at places like the recently reviewed Firehouse Subs, to be honest. But the people who've designed this facility take it a step forward, adding small decorative touches that prove somewhat transporting.

Rather than merely showing the sink, they have wrapped a brown curtain around it, giving it the appearance of being a sort of pedestal variety. Rather than simply having a regular trash can, they place a brown wicker basket -- similar to what was used at fancier locales like the J.W. Marriott Grand Lakes, only on a lot smaller scale). Think Pearl, only a little less roomy and without all the marble -- that's what you get here. A lot for a very little. 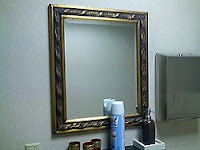 Other nice touches include the fica tree in the corner, which is one of the few non-corny uses of this item I've seen, and a homey gold-and-wood-framed mirror hanging above the sink (finally, a home-installed mirror that approaches the elegance of American Signature Furniture South Orlando and not a horror show, like at D-Lites). The little shelf below the mirror is another nice touch -- a comfortable place for the soap, air freshener and other knickknacks.

Top it off with the fact that it's impeccably clean and odor free and you really have a hidden gem.

Only problem here is, really, that you have to get past all that security in order to reach the bathroom, which makes it a little inconvenient in times of need.

Nothing to add. You've done a wonderful job with what you've had available -- people should study your work here and take notes for themselves.
at 14:09