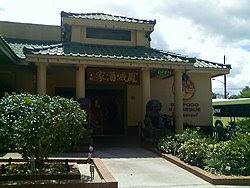 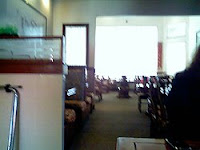 Go through the main entrance to the restaurant -- not the seafood market, which is attached to the same building but is off to the side.

Once inside, you'll see a cashier counter and an entrance to the kitchen to your immediate left, the dining room opening up straight ahead before you, and a short corridor to your immediate right. Down that hallway, that's where the bathrooms are. 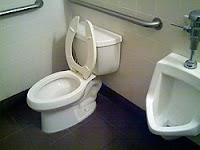 This is one of Orlando's better Chinese restaurants, which ranks up there in my opinion with Ming Bistro and Mr. K's for offering some of the best Chinese grub in town.

In many ways, the menu here is like a mixture of those two places: You can get the more authentic/traditional stuff like Ming Bistro (fried innards, casseroles with salted fish, etc.) here as well as more standard American-Chinese dishes (beef and broccoli, pork lo mien, etc.) that fills much of Mr. K's menu. In addition, you can get some wonderful Chinese BBQ and some of the best seafood in town -- thanks to the market next door. 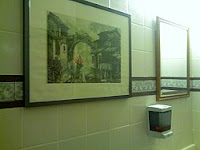 As a bonus, if you want, you can get go to the market, select fish and shellfish you'd like to eat, and have the kitchen in the restaurant prepare it fresh for you. (Similar to how you might pick out a specimen from the water tanks at Ming Bistro, only this has a much wider selection.)

The interior is a bit odd shaped, with the main dining room set in a sort of atrium -- high ceilings, round walls. The dining room is a bit darker than you'd expect it to be, considering how many windows are there, but it's still elegant and old-fashioned. (Having said that, the decor and furniture have aged a bit over the years and look like they may need some renovating in the coming year or two just to keep things sharp.) 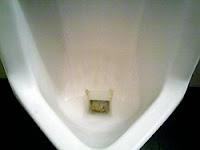 Service is professional but also a touch cold at times as a result but never rude or unaccommodating. Prices are reasonable; portions could be a little larger (especially compared with what you get at those other places mentioned) but not by much. Definitely worth a stop if you're in the area.

The bathrooms are a bit below the par set by other Asian restaurants visited over the years, including the aforementioned Ming Bistro and Pho 88. It doesn't reach the same toilet-based heights of Mr. K's either, I'm afraid.

It's a one-bagger, with a standard toilet and urinal against the far wall and a basic sink station in the upper right corner, with a mirror hanging overhead. The floors are covered in black tile, the lower walls in white tile and the upper walls in white drywall. The walls contain a few Chinese-inspired/based paintings on the walls but nothing too creative -- this isn't Oishi Ultimate Japanese Cuisine, that's for sure. 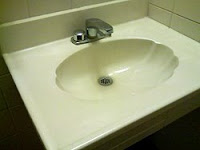 Most of the items here are clean, and the place is odor free, though like the dining room the bathroom is starting to its age. This is primarily true of the toilets, where the water stains are starting to take over the basins (the urinal was flushed, for example, but I didn't realize that at first, only after inspecting it further). Sealant is scumming up and mildewing a little. Not extensively, mind you -- proof enough that the place is cleaned well regularly -- but enough to hint that it may be time to renovate the place a little. Perhaps do it when you update the dining room some -- two birds with one stone? 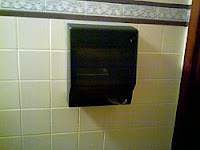 Other than that, there are two oddities here: First, the exhaust fan overhead is both very loud and covered with dust (the low-end camera used to take the picture shown here couldn't pick up all the detail, I'm afraid) -- so much so that you get a little unnerved at the site of it, lingering above you. (Haven't been this afraid of dusty in a bathroom since my stop at the horrendous Southwest Indian Traders in Colorado.

Secondly, at the sink, the sensor for the automatic faucet (the only automatic feature in the facility) is turned away from the natural spot of detection. Instead of aiming the sensor to look for hands beneath the faucet, it's turned so that the sensor is looking to the left side of the sink basin. That means to get the water flowing one hand much be under the faucet, to be washed, while the other has to be off to the side. (Makes me think the person who designed the sinks for J. Alexander's Orlando has a say in the setup here.) 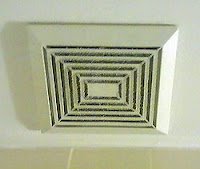 Also, hurts that the faucet doesn't really give out much water -- kind of a heavy trickle than actual water flow.

5. Could be a 6 if the place were a little less dingy and the dusty exhaust fan were cleaned and the faucet sensor were aimed properly. 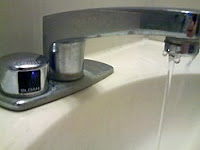 Some renovation, to update fixtures and such, might be a good idea in the near future. If not, then scrub the place well as it needs some refinement. Make sure to dust the exhaust fan grate, as it's pretty gross right now, and turn that sink sensor around so it will actually detect hands where hands should go -- and maybe get a new spigot that allows for better water flow.
at 14:54