Restroom at Flame Tree Restaurant in Animal Kingdom is Wonderful, But Watch Out for the Birds On the Way Over 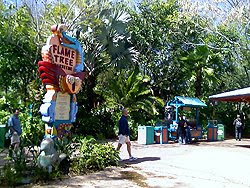 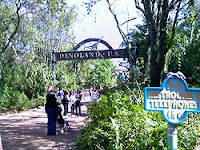 From the order counter, cross the main walkway in front of you and enter the restaurant's outdoor seating area, located across the way. Go through the sea of tables and gazebos there, walking all the while to the part of the dining room that's furthest away from the counter. (There are well-placed signs set up, leading you to the bathrooms, so it's not hard to find.)

Eventually you will veer around the back of a building and to the left, where you will see a bunch of Asian/Aztec-like ruins surrounding the entrance to the bathroom. 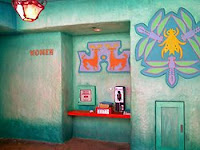 The smells of barbecue suckered me into this place.

Located in between the Dinoland U.S.A. area of Animal Kingdom and the Tree of Life, the park's central attraction, Flame Tree Grill is just a typical fast food counter-service dining spot serving barbecue, chicken and a small assortment of sandwiches.

But the park seems to pipe in the smell of BBQ into the area around the restaurant (or maybe the kitchen had fans coming out of it and pointed in our direction), making it all but impossible for anyone walking by to not think about sinking his or her teeth into some succulent BBQ. 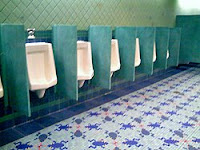 Needless to say, I was one of its suckers. After a few hours of schlepping around the park, I found myself starving and the smells of the BBQ from this place seemed more like a beacon of joy than anything else when I passed. I gave in, ordered up a plate of ribs and chicken and took them to the outdoor seating area across the way, where I tucked in and -- ironically enough -- had to fend off a slew of birds (including ducks, gulls and a few other species) while eating. Apparently, the birds get fed so often by fellow diners that they are comfortable enough to come up to your table and snatch the food right from your plate. Talk about adventure! (And more on those birds later.....) 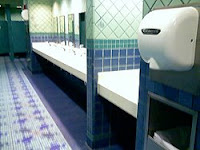 Anyway, what's annoying is that the BBQ isn't all that great. Not terrible (the chicken that came with the meal was pretty dry, the ribs okay, but the sauces were decent, especially their fruitier, less-spicy variety) but not nearly as good as what you think you'll be getting when you first smell it cooking from down the way. Perhaps it's because it's hard to eat it warm while you're finding a seat in the place's overcrowded dining area, or perhaps its because it's hard to eat when you're surrounded by birds. (I'll opt for the Texas-style 'cue at Cecil's next time.) 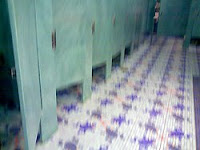 As you can imagine, after a heavy meal of BBQ and fixin's, you'll need to make some room in your gut -- especially if you plan on visiting the rest of the park (or going on any of its rides, many of which are very bumpy).

Thankfully, the restroom here is one of the best theme park bathrooms I've been to - quite a surprise, considering how crowded it is. It's right on par with the wonder toilets at the Lost Continent area of Universal Studios Islands of Adventure. 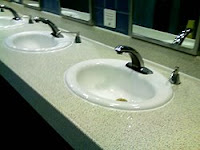 This is a large facility, on par in size with the Lost Continent toilets or the United Kingdom Pavilion bathroom at Disney's EPCOT theme park. It's a roomy, rectangular space, with a row of about a dozen urinals on the left side, followed by a string of about eight toilet stalls that wrap around the back wall of the place (with the handicap stalls being on the back wall). On the left wall is a row of wash stations, as well as a baby-changing area. All the toilets, sinks and urinals have automatic flushes or faucets, but the soap dispensers are the standard side-of-the-basin variety.

The decor is very Indian (from Indian, not "Native American), with lots of turquoise, green and purple tiles on the floor and walls, as well as some basic mosaic patterns strewn about. Very playful (not as playful as the bathroom in Conservation Station, mind you, but this place is going for a different feel entirely so it's probably not right to compare the two) and inviting. A few traces of urine singed the air (which I found to be a little more comforting than having the aroma of BBQ wafting through the vents here, for some reason) but outside of that it was pretty clean here. Quite a feat, considering that it's pretty heavily visited and I'm sure I'm not the only one who had to run here in haste after eating Flame Tree Grill's BBQ ribs and chicken combo plate. A top notch theme park bathroom. 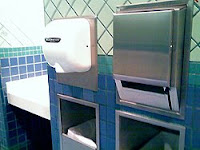 The only bad point is the trip there. Not only do you have to contend with the dozens of other people heading in the same direction but you also have to watch out for all the birds, both on the ground and in the air. At peak times, I can see this place being similar to a birdie bomb range, if you catch my drift.

8. Almost a 9, were it not for the many birds I had to contend with on my way to the toilet here. 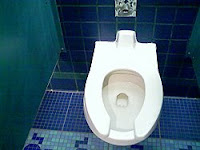 Great job keeping the bathroom here in shape and clean. It's a wonderful experience once I'm inside, but outside there has to be a way to contend with the birds. A trip to the bathroom should not be there adventurous, both in terms of getting there and being there.

After receiving your food from the order counter, follow the signs to the outdoor seating area located across from the kitchen proper. Walk through the tables,
at 14:15