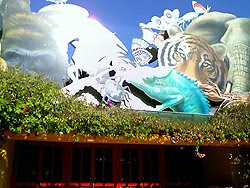 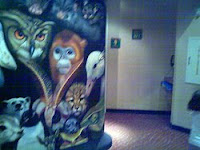 Once in the park, head to the Africa area, where you will board a train to the attraction called Raifiki's Planet Watch. It's about a 5-10 minute ride.

After arriving, walk from the train station to Conservation Station, the main building of the complex. This will take another 10 minutes or so; you will have to walk along a curving, sidewalk-paved, canvas-covered path filled with various environmental exhibits to get there.

At the end of the path, you'll see the building to Conservation Station -- really, it's the only building there (around it are fences containing various animal petting stations (as in a petting zoo). The main entrance has a multi-tiered mural of animals over the door.

Enter the building. The lobby, as you'll see, is filled with more artwork of animals, many of them hiding in a painted (literally) jungle. To enter the attraction, head to the left of the mural; for the bathrooms, head to the right. 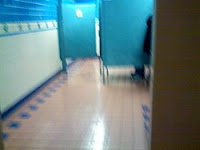 Conservation Station offers visitors a chance to step behind the scenes (to an extent, at least) at Animal Kingdom. At it, you can see where the park's animals sleep at night and where vets take care of sick animals and such, among other things. The building also houses a number of animal-related and environmentally friendly exhibits, several of which focus on man's impact on the natural world.

None of the information here is new or mind-blowingly original, but the fact that you can see various animals being taken care of, and get up close and personal with the insect world (via some slightly queasy exhibits -- put your hand on a sticky tree spider web, for example), makes it worth a visit. Also, this is the least Disney-fied area of the park and after a day spent in line at roller coasters and makeshift safaris and the like, this place feels downright refreshing. 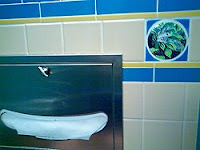 The bathroom itself is a small chamber, with two toilet stalls in the back, two urinals in the middle and a two-sink vanity area up front. (If I didn't know any better, I'd say Noah designed the place.)

Decor-wise, it feels like a cross between some of the bathrooms visited at Universal Studios (like a less ornate version of the Lost Continent toilets, if you will) and the toilets at the Barrier Island Sanctuary Management & Education Center, only with a greater (albeit slightly less successful) tropical inflection (if that's possible). 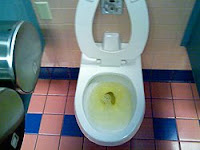 In the stalls, you'll find single sculpted accent tiles set above the commodes. Ones I saw included images of pandas and gorillas. Also in the stalls are small informational plaques that share some unique tidbits about the excretory functions of animals. One of note that I found entertaining was a plaque titled, "The Scoop on Poop." These plaques are cleverly placed on the back of the stall door, so you can read them while you're doing your business. A nice touch. 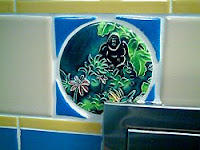 Another nice touch is the soundtrack heard over the P.A. On it, you'll hear a number of animals shrieking, roaring, chirping and such. It's a bit distracting at first (and a bit loud -- as if tailored for kids, so they won't ignore the sounds at all), but while you're doing your business (and believe me, a day of theme park food can lead to such interruptions), you'll be thankful for the noises, as they cover up your own well.

I wish I could say the same for the odors found in the place, which were quite rank -- especially the urine stench. I also found that none of the toilets or urinals I crossed had been flushed prior to my arrival. These are all on autoflush, so I'm thinking the sensors need to be checked out and tweaked some. 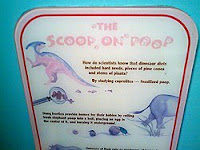 Also, the vanity was somewhat waterlogged -- about on par with what was experienced at the Lotus Blossom Cafe bathroom in Disney's EPCOT theme park. Clearly, there needs to be greater policing of this environment, to ensure cleanliness and cleanly air. Hard to do, since this is a busy place and the only spot to do your business in this end of the park (and the fact that you have to walk 10 minutes to get here, after taking a 10 minute train ride, makes the toilet all the more important to visitors). Something to consider. 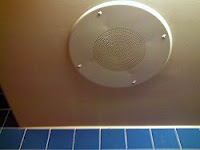 7. I liked the tile work, informational panels and animal sounds (to an extent) but but couldn't overlook the sloppiness of the place.

Maybe turn down the animal noises on the P.A. a little -- kids love them, I imagine, but adults may find them annoying after a while. Also, the place could use some more regular cleaning, especially some regular mopping around the vanity, to keep things fresh smelling and dry. Finally, double check those autoflush sensors as they may not be working to the best of their ability.
at 14:18