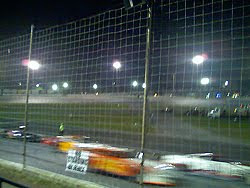 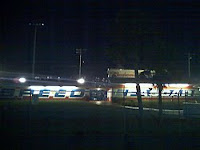 After paying admission, walk up to the main track along the main walkway there. As you do, you'll end up heading through a paved divide between two white single-story buildings. Both of these are concession stands: The one on your left (with your back to the parking lot) is where you can get hot dogs, hamburgers, soft drinks and the like; the one on the right is where you get beer (from what I saw, only Bud and Bud Light -- Budweiser gets a lot of signage here). 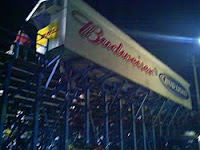 Just past the building is the main walkway, running left to right, and in front of that is the main seating benches, which stretch about 50 feet in the air. The place's quarter-mile track is on the other side of the benches; go left or right, to the edge of the benches, and then climb up to get a seat and a view of the track. (There are some other seating areas further long as well, if you follow the perimeter of the track.) 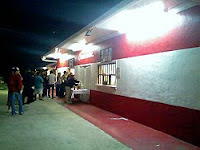 But at the junction, to get to the bathrooms, you must turn left and pass the concession stand there. Keep going to the next building, which looks a lot like that first building, and you'll see the entrance to the restrooms there, which large painted signs indicating which room is for what. 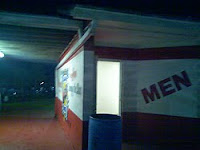 Tucked away in the near-rural environs of Bithlo, east of Orlando, this is Orlando's version of NASCAR's minor leagues. The complex is large and contains two distinct race tracks: One for drag racing and one for Florida's NASCAR league, called FASCAR, which includes races from stock cars, modifieds, and the like. Behind the main track is a pit for mechanics and drivers to prep for races. 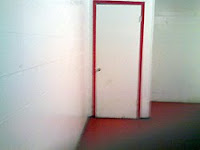 It's an old complex and certainly looks like it needs some upkeep in spots. The seating areas are sketchy and shaky at best. There's lots of cracked concrete and trash. Yet at the same time it's homey and got character. For Orlando, a city that's always rebuilding itself, this place is old and worn down and a bit backwoods in appearance, but the people are genuine friendly and tend to be enthusiasts of the sport. Not exactly a place for everyone but certainly surreal and enjoyable in its own right. 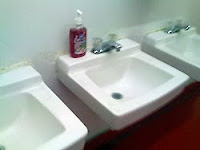 The bathrooms are unique as well. My visit occurred at the start of races, so the toilets were empty and mostly unused. On the surface, they look like concrete cousins to the mass-market toilets experienced in England, like the ones at Bicester Village or across the way from the Tower of London. They are large, filled with many urinals and have lots of concrete. But those were also a lot nicer than these. (And I've been told that if I visit at the end of the evening, the toilets are truly horrifying. Glad I didn't do that!) 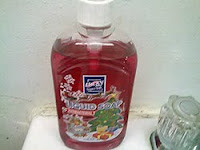 There is a strange, horror film clinic feel to this place. The walls and floor are concrete, as stated. The walls are white and with plenty of dust and dirt on them. The floors are painted deep red and have several spots where the paint has either been worn off or the concrete has been chunked out.

The red color plays a major role here. In addition to the floor, its the color that trims the supply cabinet closet door and is the color of the sign for the restroom outside. The red provides a sharp contrast to the whiteness of the rest of the place and really makes you feel like you've stepped into some haunted house or similarly scary environment. 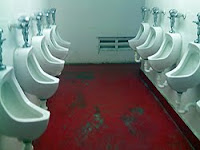 The bathroom is set up in three distinct sections. The front area includes the entrance, supply closet and sinks. The sinks are the standard white porcelain fixtures you'll find at most semi-outdoor bathrooms, including many of the U.S. national parks, like the main station toilets at Arches and the Yavapai Point bathroom at the Grand Canyon. These were somewhat clean when I arrived, but they weren't exactly the cleanest sinks I've seen. The sealant on the edges was worn, and there were plenty of mildew stains. Also, for what was about five total sinks in all, only one of the sinks had a soap dispenser on it, and it was one of those generic supermarket brand soap pump containers (a red soap, no less). 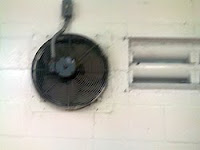 The middle section is where the urinals are. Like at the Tower of London, there are two rows of them, each on opposite walls of one another and facing one another. No privacy barriers. Lots of chipped paint and gouges in the floor. No automatic flushes. Really, kind of creepy in its attempt at sterility.

The back area is where the toilet stalls are, as well as another row of urinals. The stalls are made of drywall and have bright yellow curtains for doors. This, of course, also adds to the clinical feel here. I know the designers were aiming for an old-style garage feel (like what's seen at Cruisers Cafe), but given the worn out state of the rest of the place it just ends up looking like you're walking into a black market doctor's office for an operation you really don't want but are being forced to get. It's creepy. The toilets aren't really that clean either (reminiscent of the ones I saw at Catherine Palace in Russia), which doesn't help either. 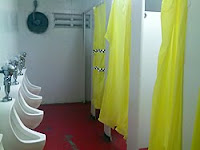 Worse still, if you're in the stall and a child runs by quickly, then the curtain lifts some in the after breeze and suddenly your assumed privacy is ruined. Not exactly what you want to have happen when you're on the throne and a bunch of drunk FASCAR fans are relieving themselves right in front of you, if you catch my drift.

Also, at the far end of this chamber is an exhaust fan. Not sure why it's there since the place smelled pretty ghastly, but the fan was covered with dust and cobwebs. Ick. 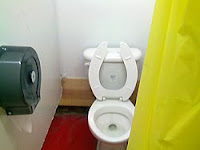 Finally, I was here in Florida's winter time. I am thinking than in the summer, the place is crawling with insects (as evident by the filthy exhaust fan). Top that with the summer heat and this probably makes for one truly horrifying and uncomfortable experience -- one that rivals the horrors of Kappy's, I am guessing.

2. Pretty scary, I hate to say. I feel bad for women, who can't just pee and go. 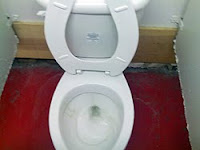 Definitely needs another coat of paint and some serious scrubbing. This doesn't have to be impeccable, considering it's really just a stadium bathroom, but if an outhouse at 10,000 feet high is considerably more polished than this, then some work is definitely needed. Aiming to equal some lower-end national park bathrooms would be idea.
at 13:43

Undesirable, they must have an impressive toilet to gain impressions form the visitors, as the timeshare relief staffs always visit the speedworld.